﻿
﻿
Just a short note, as the videos posted here really speak for themselves, the Royal Holloway MBA cohort 2013/14 were challenged to create a short YouTube based team video that introduced themselves and explained why they chose to study at Royal Holloway.

It isn't often that a student asks to be sprayed with their own shaving foam, having made a "surprise" (and particularly loud) entrance to a half-way through lecture.
But first I need to back up a bit and give you some context.  To emphasise the life skill of being on time for meetings I asked late arriving students not to come through the main doors, but to enter quietly at the back. There are probably rules about preventing late joiners and clearly securing doors would be in breach of health and safety rules. This is the 21st Century, after all.  I wrote and asked the small and intimate class of 250 odd over email and reinforced this on Moodle, our virtual learning environment. I challenged anyone arriving after :05 and invited them to present themselves to the whole class using the microphone. Quirky, jokey - but hopefully putting across a serious and important message in a way that will not cause any lasting harm or upset.
So this week Philip (pictured below) fulfilled his promise to a friend on being gifted a formula one driving suit to use it in some way with big impact. He pranked his class mates by bursting through the doors I am so precious about and shocked the living daylights out of everyone.  Me included.  Just two minutes before I'd remembered that the stunt was going to happen, but then in full flow I'd forgotten and was genuinely taken aback by the particularly lion like roar that Philip produced.  No acting was required (I'm lame..so a good thing) as the gobsmacked audience watched on.  I was told afterwards by a few students that at the point when I got the shaving foam out and started blasting this, the penny dropped for many.
The lecture was on the topic of positioning and rather fortuitously we had been considering advertising's need to create a differentiated position in the minds of the consumer using creative, entertaining, highly memorable (meh-mor-able) impressions.
I go to bed tonight a happy marketer, that was certainly a lecture that Royal Holloway BSc Management students will remember for a long time.........
Posted by Just at 11.10.13

"To be or not to be ?" Philosophy of Management: Royal Holloway MBA

Having spent the freshers week completing necessary registration protocols and getting involved in a number of introductory team building sessions that included careers, academic writing and input from the MBA director, the second week of the Royal Holloway MBA takes on a different format, with the so called 'short and fat' delivery mode used to expose candidates to managerial perspectives on philosophy.
In reflecting on an intensive second week focussed on building a strong foundation in management philosophy module leader Nigel Laurie stated "The MBA cohort was very responsive with high energy levels in the group work.  The black gorilla video was a great warm-up.  They clearly appreciated the theatre trip and the play ("Ritual Slaughter of Gorge Mastromas" see previous blog entries) made a really useful extra case on human nature and motivation which they were keen to discuss."


Seema Bhandari stated "I really enjoyed the philosophy of management module we studied in our second week. I think it is  a great kick start to the MBA programme.  The concept,  theories and relation to the real world provided useful insights into the management world.  It will definitely help to develop a powerful thinking process which is essential for this course.  It also helped obtain a sense of relief from various anxiety and stress related feelings experienced during the pre-joining, anticipation phase of the MBA programme."
Posted by Just at 7.10.13 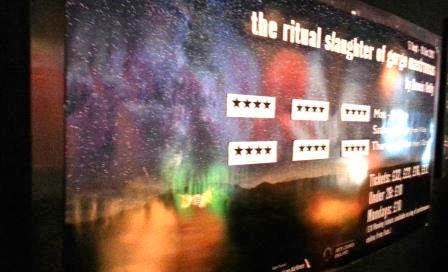 I didn't feel a numb bum, nor nod off - signs of a positive experience.  To be repeated me thinks !