As a life long student of marketing, I am always looking out for creative examples to capture and be used to engage a future group of like minded students.  My wife despairs of me at times, because out of nowhere, she will have lost me as I have stopped dead and quickly look to whip out my camera and capture the memory of an inspiring vignette for a yet to be determined class.  (It has got better - I used to teach lots of aviation related topics, including a module on airport terminal design, and this meant arriving an hour early at each airport, not to avoid traffic delays and the stress of rushing to the airport, but so that I could explore the entire airport more completely and pick up as many brochures and leaflets as I could find.)


Recently I have captured a number of images of products or companies that I feel are particularly clever names.  This idea of "Doing exactly what it says on the tin" is one what has been rather relentlessly used by a certain varnish/coatings brand (Ronseal), to an extent that this phraseology has entered the common UK vernacular.   Rather annoyingly for Ronseal, their brand name is often the omitted element.  Take a look at an example (above) of their straight forward approach to advertising, one of many advertising executions that have a certain appeal.  Lasting too, just like it says on the tin ! 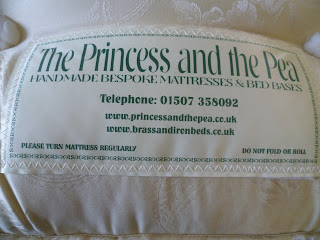 We moved house recently and rather reluctantly I agreed to the buying of a new mattress for our bed.  I was particularly grumpy about the whole exercise until after we had secured the (rather heavy) item on its iron frame.  My face lit up the moment I spotted the manufacturers label.  Instantly, it evoked a powerful, highly memorable, fairy tale of old. But, at the same time, in line with effective advertising approaches, a single minded proposition that suggested that the huge expense was going to be worthwhile, years of comfortable sleeping lay ahead.

And sure enough, the mattress is very comfortable.  Unfortunately for me, it is so firm and straight,    -all-the-way-to-the-edges-, that my duvet keeps dropping off the bed in the middle of the night.  Sublimely comfortable, but cold.

On my way back from a days meetings in Bloomsbury, where the University of London offices are, my eye was attracted to a bold, large and particularly prominent sign.
PDFprint@btclick.com is the only visible sign in this central London print shop, drawing more attention to the sign using clean white font on bright red background. Perhaps the outlet was limited by planning regulations from putting this sign on the outside or windows.  Apologies for the poor photo (I was on the run, with only my camera phone to hand).  I particularly liked this banner, as it clearly explains what you have to do within the confines of an email address.  You need to send PDF (not word or any other text file format, to this email address and this print shop will have it done for you...)  Why pdf ? I guess to ensure that the spacing and pagination is not altered in any way.  It is a shame that the strategic branding team at valiant UK champion of airline deregulation British Midland, in its final years re-branded as bmi (all lower case), did not think about their naming conventions more carefully.  When they wanted to give birth to a baby (a popular strategic notion in the 1990's and noughties) and repackage their predominantly price sensitive, leisure oriented UK regional flying they called it bmibaby.com.  Warning: the Google search for be-my-baby is remarkably similar, and not to be undertaken using a company owned computer.


I recently attended a stag (noram: bachelor) party that saw an illustrious gang of fine, middle aged men take a slow walk around a local Surrey brewery, whilst sporting Hawai'ian T-shirts and traditional lei garlands.  T.E.A (Traditional English Ale) from Hogs Back Brewery is a very clever name, a gag that sees public house patrons order "a pint of tea, please", a talking point that will no doubt make the brand more memorable. The clever visualisation of the brewery on the ridge of a male pig another pun.  More anon on this particular pet project I promise.


I try always to bring in a sense of my work place into these blog postings.  My own Alma Mater, Warwick University, benefits from a bit of creative naming.  With part of the campus in Coventry (the closest city) and part in Warwickshire, the foresighted decision makers went with Warwick University (pronounced Warrick, not War-wick).  With a pounding from German bombers in WWII and an economy reliant on manufacturing, Coventry did not have a great reputation in the twentieth Century.  I imagine still today, as my undergraduate days, each September new students pitch up to Warwick train station and find themselves some 10 miles from the prestigious university's campus.

Royal Holloway, University of London (RHUL) is the trading name of a much longer legal entity (so long I don't dare try to write it out fully, lest I get it wrong) that evolved after the merger of UK's first and second higher education institutions that were open to women.  Most of the central London property that came with Bedford College was sold and the funds used to build luxurious student halls of residence that boast bright airy communal kitchen spaces and individual rooms with their own toilets.  The remaining central London footprint enables meaningful use of the umbrella 'University of London' (as most students study at the Egham campus, set in the leafy, Surrey suburbs a short train journey from central London) which has a strong brand resonance globally.  The 'Royal' title comes from the association with Queen Victoria, who opened the College and is recognised with a large, white marble statue in the northern quad of the signature Founders building.  'Holloway' is the last name of Thomas and Jane, the childless benefactors on whose fortune the College is founded.  I like to think of 'RHUL' as being multi-faceted, that helps establish a strong, vibrant brand for our College community.
Posted by Just at 26.2.13

The age of Digital CRM has arrived !!

The Age of Digital CRM has (finally, eventually) arrived !!

"How odd !" I thought this morning when I logged onto my PC.  The day was not going well.  I had to clear my busy diary and work from home, nursing #1 son, whose sore throat and general illness prevented him from going to school today.  An experienced parent, I have learnt when one of my boys is really, genuinely sick.

I am also reminded by my ever-so successful and terribly busy fellow working but active parent chum H (vs. rarely seen upgrade v2.1) not to over share personal details on social media.  LoL (it doen't mean 'lots of love' any more...)

This week I commented on a (good) draft of a literature review on mCRM, having recently given the "over promise, under delivers" CRM lecture for second year Management undergrads.  With a culture of 'always on' mobile devices supporting push email, huge data processing warehouses and web 2.0, all the esential ingredients would appear to be in place for some genuinely individualised, appropriate and effective 121 marketing to be coming our way (or Customer Relationshp Management if you will.)


For several years I have been using this YouTube clip from the Tom Cruise movie Minority Report (Cruise plays a pre-crime policeman, whose role is to intercept criminals just before they commit the deed) to bring alive the idea of the ultimate personalised, automated shopping experience.  Whilst retina scanning remains the preserve of passport authorities and airports (it is slower to catch on than most envisioned based on the technology deployment at Heathrow airport) the mobile device, technology convergence and wifi/bluetooth provide tech savvy entities with the opportunity to lead the implementation of contextually relevant mobile advertising.  Think of the 'Around Me' ap.  Never thought this would be useful, how wrong can you be ?  Spy on your family members location using the mobile fone tracker, lovin' it, to appropriate a McDonald's tag line.

I've had three inappropriate direct mail executions arrive at home (H advises not to be too detailed here) in the last week.

(1) Someone claimed to have serviced our boiler before we moved in.."Dear Homeowner"..not going to use them, British Gas gave me a list as long as my forearm of issues around the rather cowboyesque instalation that will see me digging a drainage trench and filling it with little limestone chippings when the weather lets off.  I've already lagged an outside pipe, tried to fill a void that sucks all the heat out the house and spent £5 on a little, bendy, plastic, valve thing that will squirt over-flowing boiling water on your feet rather than spray you in the face.

(2) VW thanked me for my recent inquiry.  You know I love my Beetle.  How did they know I'd been looking at a Volvo V40 Cross Country ?  I certainly won't be buying a VW next unless they start manufacturing a 21st Century camper van, with a flat front and circular lights.  I hadn't actually made an inquiry with them.  My boys and their chums need more leg room than the Beetle can provide, however macho the new Beetle mark III is.

(3) Johnnie Boden (once a close personal friend, whose annoying behaviour is nearly seeing him put on my barred friend list).  I need say no more.  Every week he offers me 20% or 25% or free something.  Or season sale.  Or pre-season special sale.  I am a free clothes peg for his XXL flowery shirts.  He can't bring them out quick enough.  I like them so much I even pay full price some times.  I wear them at campus on show pony days to illustrate my non-conformist yet conformist credentials.
Collar, but not corporate.

Unfortunately the offers are coming so thick and fast I don't believe them any more.  The designs I like are rarely featured in the sales in my size.  Come on little people - S and XS - help Johnnie out and buy your share of his ranges so I don't keep getting bombarded with enticingly empty offers.

Anyway, back to Google.  I don't recall telling them when my birthday is, but so many logins require this data as part of your sign up (great for marketers to analyse the socio-demographic of their audience) I guess they know.  I never asked them to send me a birthday message, in fact, I don't think I would welcome such an intrusion.  Hence, my wry smile at seeing the Google cake logo on my search engine page.  This rather perfectly hit that balance of plesant surprise, but not uncomfortable leaning over your shoulder and gauping.

I had to go back and check (lest it be some momentus world leaders birthday too), my hovering mouse had a subtle yet perfect text within it "Happy Birthday Justin !".