Building Powerful Arguments - use a Knight in Shining Armour


I know (from bitter personal experience) that at times whilst studying for an MBA qualification you would love for a knight in shining armour to come to your rescue, slay your dragons and allow the situation to move on to the happy ever after scene.  This is a rather light hearted post that uses the knight/armour/fighting metaphor 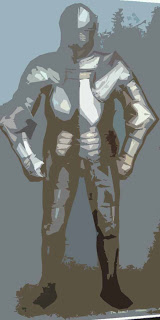 However you describe it, I fully imagine that we all face/have faced this kind of situation at some point.  Thankfully we have fellow course mates and family members to help, but I thought the following advice might be useful ?


I would like to put forward a visual metaphor I learnt from a fabulous ex-colleague Jo Donachie, a gifted and patient study skills specialist.  I do not claim for this idea to be an original, but with a bit of my own creative story embellishment I have found this to be a highly effective way to communicate a tricky concept that causes much frustration.

First of, and bluntly delivered the shortened version:

"I don't care what you think."


"Use the published words of others as armour, and go into battle with no gaps showing"

Now that I have got your attention, I can explain each of this steps in a little more detail.  And, before you ask, there are no plans for a short TV Series titled "The Naked Academic."

The harsh reality is little or no credit is given to the personal opinions of students.  What is expected is hard evidence in the form of data, quotes and paraphrased ideas identified using Harvard in text referencing (every idea, each one).  This rich content (gleaned from hours of careful searching in the library and using e-journal search engines) is then carefully constructed into an objective consideration of the facts.  The use of the third person clearly helps establish that this is not a personal opinion.  The choice of content, the extent to which various aspects are covered, of course, can give a piece of writing a sense of the writers own perspective.  However, the exclusion or over looking of leading ideas and concepts might be considered as either poor scholarship or deliberate bias.

Clearly some care is taken in delivering this line.  It can be softened, if offence might be caused, by talking about imagining someone else naked, yours truly excepted.  Then the task is to carefully identify a variety of different shaped pieces of armour to cover the naked body.  In this metaphor, each piece of armour is considered to be the words of  expert opinion, dutifully referenced.

Final Step 3: The message wrap "Use the published words of others as armour, and go into battle with no gaps showing"

Each suit of armour is different to fit its rightful owner, but shares a common pattern of construction and constituents, aping the introduction, argument threads and conclusion seen in a strong essay.

The fit should be tight, with no gaps, lest a stray arrow defeat the brave knight.  No excess armour should be carried, as getting stuck in the mud and being picked off by nimble foot soldiers is a poor ending.  Write concisely, avoid over emphasising one area, at the cost of killer blows elsewhere. Rather, have glorious memories of thrust and counter thrust of incisive analytical blows that legends are made from.  [Don't waste words on descriptive 'mud', concentrate on the exciting fighting/analysis]


As the broad sword can be countered by a shield, both sides of an argument should be considered and the armour carefully fitted together as a coherent body, each individual part having its own important role to play, yet still adding to the whole.

At this point there is often lots of head nodding and the story is all but done, without the need for further explanation or clarification.  Just sufficient time to pepper our iron clad pupil with pre-battle bullets (but my brilliant history colleague Professor Justin Champion would say "Didn't they come later ?");

* Not usually web sites, unless they can be identified as authoritative.

Go forth brave Scholarly Knight of Harvard and fight the good fight !


For further help on writing for academic purposes take a look at previous postings in the zone May-July 2012.  E.g. Lovely Literature Review
Posted by Just at 20.5.13